“… the landscape that emerges through my music is rather like the misty dawn of a new day; a day not yet ripened by the sun, but one that shows the promise of a warmer future – a way through the emotional morass.”

Take the time to read the delightful new interview in the Salon du Muse at the Soul Food Cafe. Heather Blakey, web mistress of  Soul Food, takes the time to interview British composer, Mike Sheppard. This interview explores spirit and soul and shines some light on the path for those suffering from bereavement.

It was time to scatter Jerry’s ashes.  A few of us gathered in the woods near his house that brisk January 1st morning of 1995.  His ashes were placed in a large glass punch-bowl perched on a small table on the wooden pier Jerry had built.  It extended partway over his pond.  Since none of us had ever scattered ashes before and couldn’t contemplate our reaction to handling the remains of our close friend, a man who died way too young, we allowed for each of us deciding at the moment whether or not to participate in the ritual.

Flute in hand, Carol moved down the hill to stand in an open area near the pier.  The waves of mist and fog made it hard for us to discern her, but we were able to catch the plaintive notes as they drifted up through the Arkansas woods Jerry so loved.  This was his wish–to be scattered on his pond where he always swam in the hot summers, where he sat to meditate and contemplate.  The stillness and beauty of the pond and the surrounding woods were a balm to his spirit in an increasingly difficult world.  He had been diagnosed with cancer on his thigh; shortly thereafter his leg was amputated.  It never healed properly as the cancer continued its relentless spread.  How could someone who was so dedicated to living off the land and being independent, how could he deal with this huge impediment to his way of life?

Those of us gathered had tried to help Jerry on his journey and be supportive as he attempted to continue to live his chosen way of life.  Preparing food, cleaning his home, a cabin he lovingly built by hand, stacking firewood and hauling water from the pond for washing dishes, all these things were but temporary stops on his way to finally needing constant care in someone else’s home.

And now we gathered to say goodbye, Jerry back on his land once more.  The seven of us strolled through the fog, following the notes of the flute down to the pond.  We each shared what we brought to read or say in his honor.

Then a pause… a long pause.  Would anyone be able to scatter Jerry’s ashes?  I kept thinking I couldn’t possibly put my hands into his ashes… I had just seen him alive.  How could I do such a thing?  This was Jerry, his actual body, burned down to dust and ashes.  How could I touch those burnt remains?  Yes, I knew there was a Styrofoam cup on the table we could use, but even so, how could I dig into his ashes and let them sink into the water?   I knew very well the real Jerry was fine and beyond all this, but still, how could I honor his remains by scattering them?  Could I, even knowing it was what he desired?

As I pondered my own images, my preconceived notions, I saw Carol walk to the table on the pier.  She scooped up some ashes in the cup and gently spread them on the water.  Another of his friends then did the same.  And another.

Finally I was ready – sort of.  It was time for me to approach the table, but I still didn’t know what I would do or if I could do anything.  The crisp winter air tinged with woodstove smoke from other cabins sprinkled throughout the valley invigorated me to at least resolutely head onto the pier as it gently rolled under the weight of my steps.  The wood creaked a bit as I crept forward and then I stood before what remained of Jerry.  I took a deep breath in preparation…Ashes to ashes, dust to dust.

I plunged my bare hands into the ashes, letting myself relax into what felt right at that moment.  No barriers of gloves of Styrofoam to the experience.  And was I surprised!  The ashes were not all ashes.  There were chunks of bone throughout.  Ohhh, Jerry’s bones!  A moment of reeling with the knowledge; then came an infusion of energy.  I grabbed two large handfuls, flung my hands up and out, releasing ashes, dust and bone high into the sky accompanied with the cry, “Go, Jerry!  Go!”  He was free and flying to the heavens.

The breeze seemed to reflect my exhilaration and joy as it caught the ashes and bone bits, carrying them further into the heavens before returning them to the pond Jerry loved.  I knew then that the phrase “ashes and dust” was a fallacy, a euphemism for ashes and bone fragments.  But I also knew a deeper truth. Jerry was not those ashes and bones; he was spirit and joy!

(published in Sage of Consciousness)

THE WEEPING OF A DISAPPOINTED WOMB

hiatus in the weeping

of a disappointed womb

My womb was pleased

and so was I

in the ease of pregnancy

the joy of birth

“the weeping of a disappointed womb”

was a uterine function;

it stuck over the years

its accuracy and intent.

This womb, my womb,

Symbolized the part of me,

in use and abuse;

until I could learn

to speak for myself.

As I apply this wisdom

the uterus is taken from me

for all its gentle weeping

all its being there with me 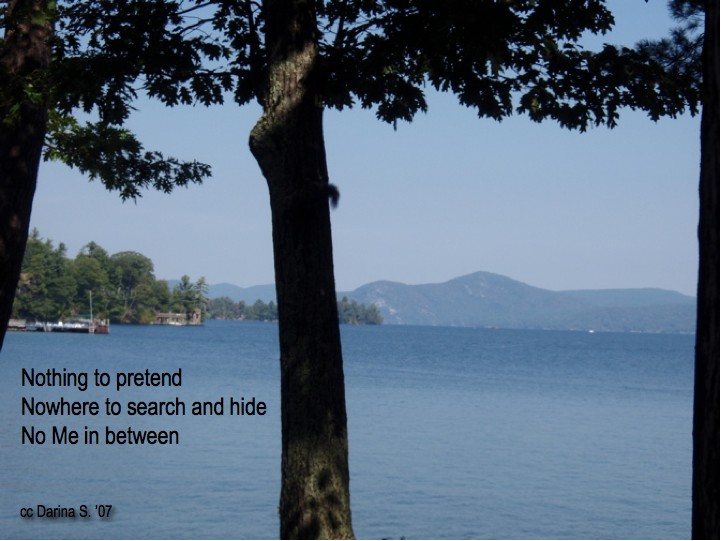 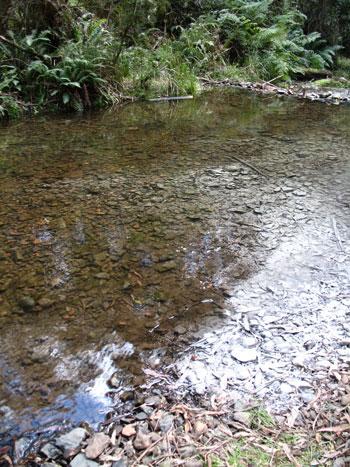 Helen, Greg and I took Darryl to the place he had asked to rest in. The Stoney Creek, within an hour of Melbourne, gurgles through remnants of old Lemuria. We all agreed that this is the perfect resting place.

As Darryl’s birthdate, Father’s Day and the seven month anniversary of his death approach we are preparing to set him free. Darryl’s ashes have been here long enough now. We need to let him journey on, have wings and the freedom to journey with us when he can.

As you set out for Ithaka
hope your road is a long one,
full of adventure, full of discovery.
Laistrygonians, Cyclops,
angry Poseidon-don’t be afraid of them:
you’ll never find things like that on your way
as long as you keep your thoughts raised high,
as long as a rare excitement
stirs your spirit and your body.
Laistrygonians, Cyclops,
wild Poseidon-you won’t encounter them
unless you bring them along inside your soul,
unless your soul sets them up in front of you.

Hope your road is a long one.
May there be many summer mornings when,
with what pleasure, what joy,
you enter harbors you’re seeing for the first time;
may you stop at Phoenician trading stations
to buy fine things,
mother of pearl and coral, amber and ebony,
sensual perfume of every kind-
as many sensual perfumes as you can;
and may you visit many Egyptian cities
to learn and go on learning from their scholars.

Keep Ithaka always in your mind.
Arriving there is what you’re destined for.
But don’t hurry the journey at all.
Better if it lasts for years,
so you’re old by the time you reach the island,
wealthy with all you’ve gained on the way,
not expecting Ithaka to make you rich.
Ithaka gave you the marvelous journey.
Without her you wouldn’t have set out.
She has nothing left to give you now.

And if you find her poor, Ithaka won’t have fooled you.
Wise as you will have become, so full of experience,
you’ll have understood by then what these Ithakas mean.

A Legacy of the Soul Food Cafe

The Soul Food Cafe, built by Heather Blakey, was inhabited by an international group of writers and artists whose global mission was to promote writing and art-making as a daily practice through the use of interactive web-based technologies such as blogging and e-mail groups. The Temple of Solace was an important feature of the Soul Food Cafe and is being reinvigorated by Heather Blakey as a part of work in the field of death and dying. Soul Food remains a wonderful resource. Using the Wayback Machine link you can access all the features of this quirky world.