A friend who has provided me with solace when nothing and no one else could is really suffering today.  Kelly hurt her paw sometime in the night by twisting a toenail entirely around and backward.  The shock just to see the bloodied swollen paw this morning and the look in her eyes can’t be a fraction of the discomfort she felt yet she didn’t make a sound.  Just laid there with her head down.  Poor babe.  The vet just left and she’s well sedated but still crying a little.  Send some good vibes out for a sweet soul, will you?  She’s been an angel of mercy for me and deserves much in return.

Years ago, a hospice volunteer mentioned each patient and caregiver she spent time with was like a pearl in a necklace—over time, the necklace grew and grew.  I decided to use that idea as a theme for the Annual All Day Volunteer Retreat I facilitated for my hospice volunteers this year.  I had also come across Heather’s Soul Food Site “Descansos” which familiarized me with the term.  I then thought about how this theme could apply to hospice and to our Retreat.  Combining the two ideas, I planned a “Day of Remembering,” with the creation of a pearl necklace becoming the descansos made by each attendee.

Starting with a visualization to activate each participant’s memory about their loved ones, whether personal or hospice patients, we all thought of eight people we wanted to remember, and a few words about each that reminded them about what they received as a legacy from the person.  The legacy might manifest as an idea, a trait, or an actual item; such as, a recipe, a love of cooking, or a well-used rolling pin.

I previously drew eight circles of varying sizes, on a piece of paper, with each circle touching the next, forming a completed chain.  This would become our necklace.  The largest circle in the necklace was generally reserved for a personal loved one, with the others filling in for hospice patients.

The grief of hospice workers, and other nurses, doctors, and aides, etc., is considered disenfranchised grief—not acknowledged as real grief since the health care worker only knew the patient for a relatively short time compared to if the person was a beloved parent, spouse, child, grandparent.  However, one can become quite close to someone and still need to deal with their loss when it occurs.  When the losses are ongoing, as with health care workers, and one is then on to the next patient, those losses aren’t acknowledged and dealt with, and so accumulate, leading to eventual burnout.   So I try to allow the volunteers an avenue to know it is all right to grieve for patients, to provide an avenue in which to grieve and express that grief in a different way each year.  We’ve done “Legacy Writing,” “Ethical Wills,” “Rekindling,” “Inner Child” and many others in the six years of having Volunteer Retreats.

We each wrote the name of the remembered person in one of the circles.  Then we perused magazines to find pictures or words describing the person and their legacy to us, or used colored pencils or crayons to draw pictures or words.  There is something so therapeutic in using scissors and colored pencils, in smelling glue and crayons that takes us back to childhood.  The volunteers know by now every creation made at our Retreats is considered a work of art, and so have resolved any lingering critical voices in their heads from childhood.  Even the men get involved with creating and sharing.

Snip, snip, snip go all the scissors.  Sniff, inhale deeply beloved smells of childhood.  Oh! Look at this! Wow! intersperse the proceedings as people move about seeking the perfect picture or accessory like ribbons or beads, small flowers or feathers, yarn or thread, crayon or colored markers.  Anyone see a lilac bush in bloom?  How about a man fishing?  Here’s a woman baking.  Who was looking for that?  Looking for oneself as well as looking to help others.  Sharing as part of the process of creating, usually considered a solitary activity.  And sometimes it got quiet as each was busy getting it “just right.”

Finally finished, or as finished as it can be in the allotted hours.  I asked each to bring in a fairly recent picture of themselves.  Now those pictures were glued into the middle of the picture, and we each truly had a pearl necklace going around our necks: a descansos of our legacy from losses of loved ones. 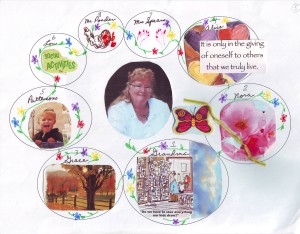 Then the verbal sharing started.  Each, in describing their necklace, gave a eulogy for the pearl-people (in their necklace), telling of the legacies they received from each, telling stories and activities, sharing the love they felt with others in a setting where they were really listened to.  And what stories!  Fortunately, I brought many boxes of kleenex, which were needed during the three hours of sharing.  Powerful legacies from patients one was with only a short time but where a real connection was built, showing we might never realize the influence we can have on others.  Three hours later, we all felt as if each of us had honored our loved ones in a eulogy sometimes more pertinent to the person than that done by the “professionals”—ministers and funeral directors.  Our hearts filled with inspiration and the goodness of so many people, including the volunteers telling their stories.  Truly “A Day of Remembering”, by making a pearl necklace, a descansos of our loved ones.

This was so therapeutic I went on and made a pearl necklace honoring my personal loved ones and using their pictures as part of each pearl, as well as individual collage cards honoring my memories of each person and their legacy.

Fiery pits,
An eternity of backbreaking,
meaningless work
I could deal with.

An email from a friend
across the world from me
‘sorry for the once size fits all, but I’m neg on time & want to write se’

A troubled friend,
blaming himself
for something that
is no one’s fault.
And there’s nothing I can do.
This is hell.

Life goes on,
But how can I face normalcy
eating breakfast, going to work,
when he is in living hell?

Not wanting to share.
My feelings for you
Our history
belongs to us
no one else
but I still need to write it.

Trying to write
About you and me,
our past, or my past anyway
Writing honestly,
hoping its not going to hurt you
knowing it probably will.
Writing it anyway.

Making it real
If its written,
Does that mean it is real?
Or is still just real for me?
And does that even make it more real?

Does something shared have
to be remembered by both people
for it to be real?

The little things,
no, probably not,
but what about the big things?

You told me you loved me
and I loved you
but you went home
not remembering that
not feeling it.
Is it real?
Was it real?

Getting it out of me
Trying to get over you
But will I ever truly do that?
Won’t you always be a part of me?
A part of my life.
Does it even matter?

Whenever I need a mental get-away, I create a safe haven.  Sometimes this is a very real place– in my living room when I perform a meditation with a candle in a cobalt blue glass.    Most times, it is within my imagination, where I create a sanctuary in my heart where a single flame burns.

May you also find a safe haven to dwell…….

Dear Ms Raven,
I just want to let you know how much it means to me that you come to my mother’s house each day and that you are there to greet her when she opens her curtains. You are making a huge difference to her life and in turn, to mine. Mum feels she has a real purpose as she shops for small treats to keep you and your partner happy.

Thank you for trusting me and letting me take these photographs of you. Mum wants me to have your image put on to magnets so that she can admire you on her fridge and show everyone just what a magnificent fowl you are. I think we might have quite a selection of your images on all sorts of thing here at Soul Food.

In a world of rampant greed and ‘me’ orientated thinking the Soul Food Cafe remains a beacon that guides people towards a different style of living. Soul Food was forged in a furnace of events that continue to reverberate through the corridors of my internal world. Soul Food was seeded in the seed bed of ‘Writing for Well Being’ courses and has grown, in labyrinthine circles to form the shape that exists today. Today the Soul Food Cafe provides water for thirsty travelers who have spent a long time in the deserts and the pebbles that are thrown in her waters form concentric ripples that impact on more and more pilgrims seeking respite from the ‘I’ society.

A new initiative, as a part of the Temple of Solace, is a program called, for want of a better title, ‘Spreading the Comfort Rug’. The plan is to provide a program, create a lonely planet guide to how to clean up the ‘me’ society and help ensure that people feel that they are genuinely appreciated and cared for.

To begin today I suggest that you visit one of those places that have a free postcard stand. We are going to make good use of these free cards.

At the expense of appearing greedy select half a dozen cards.

Take them home and sit and think about who you feel is a mentor. For example I am in awe and wonder at the generosity of Margaret Olley, one of our famous Australian artists. As a result of reading this article I am going to send Margaret Olley one of the cards telling her how much I admire what she is doing. First of all I have to find out how to mail to her but I am sure someone will be able to help me acquire her address.

Then I am going to send two other cards to two other people who have actively nurtured and cared for me during Darryl’s long illness and as a sense of profound loss and grief engulfed me. I may go a step further and let a few other people know just how much their support has meant to me.

Follow my lead and send three cards over the next few days. Consider sending one to someone every week. Then take a moment, come back in here and share with us how doing this made you feel.

A Legacy of the Soul Food Cafe

The Soul Food Cafe, built by Heather Blakey, was inhabited by an international group of writers and artists whose global mission was to promote writing and art-making as a daily practice through the use of interactive web-based technologies such as blogging and e-mail groups. The Temple of Solace was an important feature of the Soul Food Cafe and is being reinvigorated by Heather Blakey as a part of work in the field of death and dying. Soul Food remains a wonderful resource. Using the Wayback Machine link you can access all the features of this quirky world.